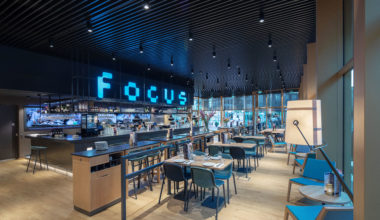 You might have been in Focus Filmtheater before, watching an English spoken movie or even a movie without any dialogues at all. But we are aware that you might miss a lot: so many wonderful movies are made by talented directors from all over the world, spoken in many different languages. Rather frustrating isn’t it. No more despair: from now on we are going to show English subtitled films. Every Wednesday at 19:00, to start.

A visually stunning, poetic documentary about a woman who keeps bees and the fragile balance between man and nature. For three years, a small crew followed Europe’s last female wild-beekeeper, Hatidze Muratova. She’s as pure as the honey she gathers from her wild hives, and her surroundings are as bountiful as they are rugged. In a deserted mountain village, with neither electricity nor running water, she looks after her bedridden mother. In this extraordinary setting, Tamara Kotevska and Ljubomir Stefanov produced a stunningly filmed, intimate portrait, in which the protagonists often seem to behave as if they’re unobserved.

A dramatic turn of events comes with the arrival of a couple with a caravan full of children. From a hilltop, Hatidze watches as herds of cows overrun the village. The rough treatment of the children and animals contrasts starkly with Hatidze’s tender relationship with the bees. When the father hears how much she earns with her honey, he starts to show an interest in beekeeping. Will he understand her most important rule, that you must never take more honey than the bees can miss? Oscar nominated & 30 wins and 38 nominations on film festivals worldwide.